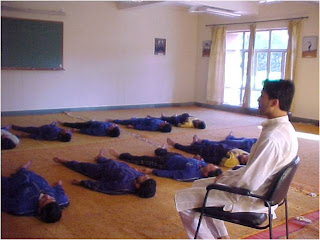 Yoga Nidra is one of the finest way to Self Management Yoga-Masters as well as Psychologists are using it now days as a Psycho-spiritual Technique of Healing. Ancient Indian scriptures are pregnant with the knowledge of self realization. Yoga Nidra may be one such technique at the same path. It is a complete practice of Yoga Sadhana. It can lead the aspirant at the stage of Samadhi. These days Yoga Nidra is practiced as a best-known technique to induce complete physical mental and emotional relaxation. Yoga Nidra is a state of consciousness, which is, neither sleep nor awaken, neither is it concentration nor hypnotism. It can be defined, as an altered state of consciousness.

For the practice of Yoga Nidra one should lie flat on his back and follow the spoken instruction of yoga instructor. It is convenient to use Yoga Nidra tape. During the practice there should be no movement by the practitioner, as well as he should try to remain awake and aware of every given instruction. In Yoga Nidra, it is not necessary to concentrate. One should just keep the mind moving from point to point and be aware of every experience. Yoga Nidra means sleep with a trace of awareness. Practice of Yoga Nidra in this study is the simplest method of relaxation which is being practiced in the flat lying position of shavasana and follows the spoken instruction of Yoga instructor. The practice includes the resolve, body part awareness, breath awareness and visualization.

Scientists are taking advantage of new technologies to see exactly what goes on inside the brains of Yoga nidra practitioners. The neuroscientists hypothesize that regular meditation actually alters the way the brain is wired, and that these changes could be at the heart of claims that meditation can improve health and well-being. But the rigors of the scientific method might never have been applied to studying the practice of Yoga Nidra. 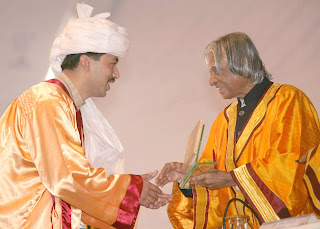 Dr. Kamakhya Kumar in 2006 awarded by Ph. D. degree by Dr. A. P J Abdul Kalam (President of India) for his work "Psycho-physiological Changes as Related to Yoga Nidra". He observed six months effects of yoga nidra on some Physiological, hematological and some Psychological parameters on the practitioners and he found a significant change on above mentioned parameters.